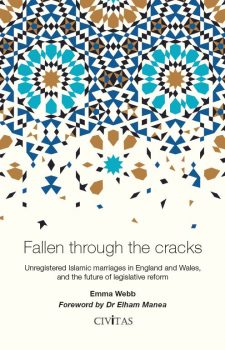 A significant number of Muslim women in the United Kingdom are in unregistered religious-only marriages, many of whom will be unaware that they lack legal protections and access to marital rights.

In this report, Emma Webb examines how the asymmetric nature of those sometimes polygamous marriages and Islamic divorce – which allows a man to instantaneously divorce his wife but makes it much harder for the wife to initiate divorce – leaves women in a precarious situation. They face the consequences of sudden divorce and being left without financial assets or property, destitute and without support in their own communities. The sharia councils they turn to have been known to perpetuate the abuse and discrimination already suffered by some women.

On the basis of testimonies, case studies, interviews and a review of legislative proposals, the report makes several recommendations, including to amend current legislation to make mandatory the registration of all religious marriages in the England and Wales, in line with the proposed Marriage Act 1949 (Amendment) Bill – and to extend the Divorce (Religious Marriages) Act 2002 to cover Islamic divorces, as was previously achieved for the Jewish community.

‘I strongly commend this timely report. The women who have shared their stories have risked much. I hope that their courage will not be in vain – and that Government legislation will at last be introduced with great urgency, as so many Muslim women in this country are suffering in ways that would make our Suffragettes turn in their graves.’ Baroness Cox of Queensbury

Maya Oppenheim in The Independent, ‘All religious marriages must be registered to protect women from abuse and discrimination, report warns’

Emma Webb on the Reaction website, ‘Fallen through the Cracks: Government must protect Muslim women by requiring religious marriages to be registered’