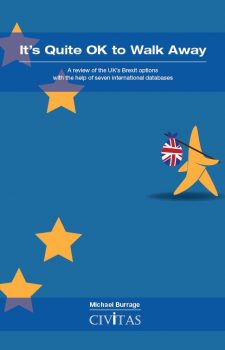 It’s Quite OK to Walk Away: A review of the UK’s Brexit options with the help of seven international databases

The image of the EU’s Single Market as an economically successful project, membership of which is vital to the interests of the UK, has rested on the hopes and repeated assurances of politicians rather than any credible evidence.

No UK government has ever sought to monitor its impact until the rushed analysis, now widely held to be unreliable and untrustworthy, produced by the Treasury just before the referendum. There is, therefore, no authoritative evidence against which to assess the economic consequences of the Government’s decision to leave the Single Market and, potentially, trade with the EU under World Trade Organization rules.

In this new study, Michael Burrage uses seven international databases to assess the benefits of the Single Market for the UK, comparing its performance with that of other EU members, and with non-members who have traded with the EU. The data shows that the Single Market has not delivered the export growth it was expected to.

Michael Burrage also shows how other supposed benefits of the Single Market are largely imaginary. There is no evidence that Single Market membership has had a positive impact on UK GDP or productivity growth. The idea that the Single Market has been good for jobs is belied by the astonishing employment record of its members compared with other developed economies.

The benefits of Single Market membership have been illusory, while its costs are real, onerous, and unacceptable to a majority of the British people. Theresa May’s decision to withdraw the UK from the Single Market has been criticised by some for jeopardising the economy. But, as she and her ministers embark on negotiations over the UK’s future relationship with the EU, Michael Burrage shows that it is quite OK to walk away.