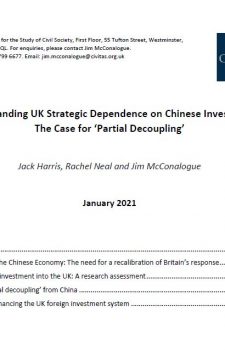 Since the beginning of the pandemic there has been a growing public awareness of the nature of the threat China’s investment strategy poses to the UK economy and the West. Often missing from this discussion is the extent to which political and security concerns should also be matched by a recalibration of the UK economy to limit dependence on China, argue a team of researchers at Civitas in a new report.

Using the China Global Investment Tracker (CGIT) – published by the American Enterprise Institute (AEI) and Heritage Foundation – which is the only comprehensive worldwide public data set covering China’s global investment and construction contracts, the authors of this report provide an account of Chinese investment specifically into the UK. By coupling that data with information on reported Chinese state-owned enterprises and reported CCP-affiliations, the report found that eighty per cent of Chinese investment in the UK over the past decade (2009-2019) came from state-owned/mixed or reportedly Chinese Communist Party-linked corporations.

Given the role of Chinese state-owned, mixed ownership or CCP linked enterprises, the authors argue ‘the UK should pursue a “partial decoupling” of its economic relationship with China.’

By analysing the 112 Chinese investments into the UK – including construction contracts – over the decade between 2009 and 2019, our research found that:

The evidence shows why immediate concerns surrounding the UK’s productive capacity, such as PPE (purchased during the crisis for a period from China) should be placed in the wider and long-term context of Britain’s approach to the economy for a series of decades.

The Brexit process offers opportunities to correct the mistakes of the past and to meaningfully evaluate our domestic affairs: ‘In an increasingly unpredictable world and faced with the rapid rise of China to pre-eminence on the world state, it is vital that post-Brexit Britain is resilient, dynamic, and able to stand on its own two feet.’

These outstanding concerns relating to economic resilience come at a time when the Government should be preparing for the UK’s recovery from Covid-19. The authors find:

‘A fragile post-Covid economic revival – with businesses continuing to have poor access to loans or other borrowing instruments – will be hugely susceptible to hostile foreign takeovers from China and elsewhere. The UK economy must be recalibrated so that in the future it is less dependent on nations that are unpredictable and authoritarian.’

The authors make the case for ‘partial decoupling’: ‘Partial decoupling has become a necessity. It is as much as about avoiding losses as generating benefits. Future UK decoupling legislation would insulate against the challenges posed by current economic dependence on China.’

The report concludes with a discussion on the National Security and Investment Bill (NSIB), which was debated in Parliament and is set to become legislation soon this year. The first meaningful law of its kind, it will provide a ‘screening mechanism’ on investments into the UK. The authors say the NSIB is a ‘step in the right direction’ and will bring the UK government in line with other Western nations, but ultimately ‘misses the opportunity to recalibrate our economy so that investment of the future enhances our productive capacity.’