If new homes are being approved, why shouldn’t we expect them to be built? 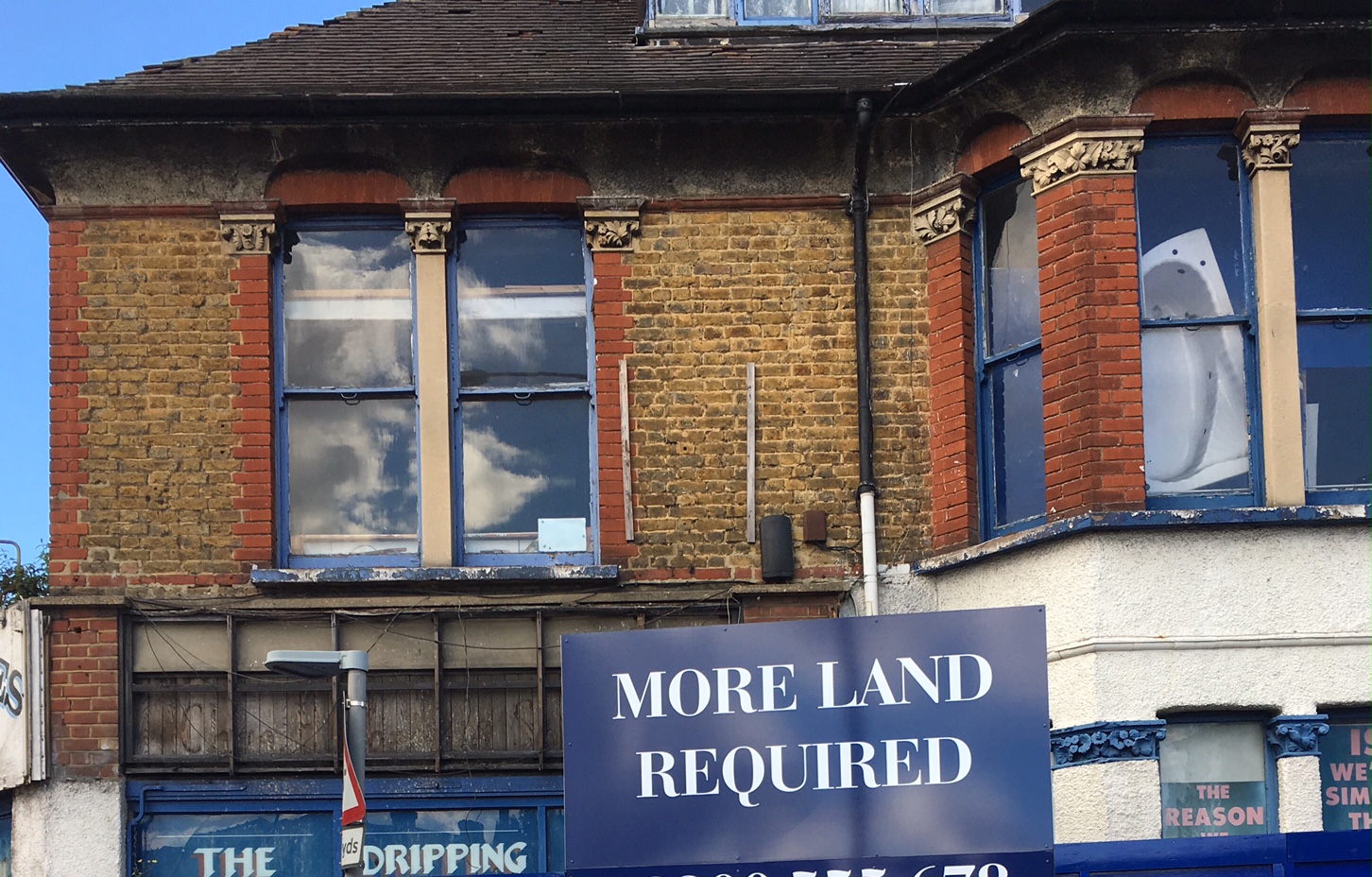 With the housing white paper imminent, it’s squeaky bum time for the major developers who have been on notice for a while now that the communities secretary, Sajid Javid, is unimpressed with the rate at which they build out planning permissions.

Last November he told the building industry: ‘I cannot look the other way when I see land-banking holding up development. Some of you have conceded to me, in private, that it happens. Some of you still deny it’s an issue. But there’s clearly something going on. The number of plots approved for residential development each year rose by 59 per cent between 2011 and 2015. But the number of building starts rose by just 29 per cent. In 2012, permission was granted for more than 195,000 homes. Yet three years later, 40,000 of those homes still hadn’t been completed. 40,000 homes! That’s a town the size of Hartlepool, just waiting to be built.’

There have been rumours for some time that, in response to this growing gap between the number of homes approved and the number of homes built, ministers are thinking about imposing conditions governing build-out rates alongside planning consent. It is an idea that I have promoted, as indeed I have also described the problem. I don’t think it’s a silver bullet for the housing crisis, but it needs to be part of the weaponry available to local planning authorities. The housebuilding industry is very much opposed to it, arguing that developers would then apply for fewer planning permissions and that marginal sites in particular would become unviable (which is why such an approach should be at the discretion of the planning authority rather than imposed across the board).

Yesterday, the leading private-sector planning consultancy Nathaniel Lichfield Partners (NLP) produced a well-timed report interrogating the assumptions on which this proposal rests and which underpin Javid’s position on the ‘land-banking’ debate. The headlines generated by this stressed the need for the planning system to release more land and that ‘land hoarding is “largely illusory”’. These will have gone down very well with developers but the contents of the report are, as ever, rather more nuanced than the press coverage they generate. There is lots of interesting detail in it, which may create a bit of a discussion in various places, but I will concentrate here on just a couple of points that I think are most salient to the debate right now.

Do developers ‘land bank’? Yes, categorically, they do. They need the stability of a steady pipeline of land a few years into the future and describe their landbanks in their annual accounts (Shelter has set out here what the bigger developers hold). But this is not really the issue. Do developers sit on land – what we might call ‘hoarding’ rather than ‘banking’ – waiting for it to rise in value? This is a moot point, and it depends very much on the trajectory of the market. If land values are steady, clearly the developer has little incentive to wait (and indeed there is the risk that the price might fall, so better get on and build quick). In a rising market, or during a slump in which there is a reasonable expectation that prices will recover at some point, there may well be an incentive to sit tight and wait for it to rise in value.

The NLP report points out, however, that there has been a series of heavyweight studies that have dismissed the idea of widespread hoarding. All other things being equal, the business model of the developers, who work on the basis of ‘return on capital employed’, does create its own incentive for developers to build homes and sell them as quickly as they can. This might be true, but it is something of a straw man argument because the core of this question is not about whether developers want to build and sell homes, but at what price they are prepared to do so. Their exposure to the land market is such that they cannot sell homes at below current prices, and so the rate at which they build and sell is determined by how many people are ready to buy at those prices in any given location.

That this is the case is borne out by NLP’s previous work (referenced in the latest paper) which shows that developers build out larger sites proportionately more slowly than small sites. This is how we end up with slow build-out rates which may, if market transactions and effective demand dip, result in developers’ land banks swelling, although at the same time they might stop buying land which would counteract the effect. It is important to note that this is not a question of sites standing idle with not a spade in the ground, waiting for developers to start, it is a question of how quickly each of the homes on that site is finished and released into the market (completed), and that comes down to the absorption rate (which I have discussed a bit here).

The really interesting bit of this report, in my view, is what it has to say about the ‘permissions gap’ – the difference between how many homes have been approved by planners vs how many have been built (full disclosure: it has a little dig at work I’ve done at this point – I won’t take it personally). This gap has been growing rapidly since 2011, with completions lagging approvals by in the region of 100,000 a year now. There are obvious caveats to that – clearly building homes takes time, bigger sites take longer to get going etc. This is all true and NLP describes the obstacles facing developers at great length. But even when you factor in reasonable time lags there is still a gap. The bottom line remains the same: local planning authorities are approving many more homes than are being built.

Increasing the amount of land released by the planning system has been a central objective of government housebuilding reform in recent years. This approach has yielded some success, in the teeth of much opposition from Nimby campaigners, so it is right that questions are now being asked about what uses this land is now being put to. In his Conservative Party conference speech last October, Javid was pretty clear about what he expected: ‘Almost 280,000 planning permissions were issued over the last twelve months. I want to see each and every one of those homes built as soon as possible.’

The NLP report suggests, however, that this is a quite unrealistic expectation, stating: ‘It is generally accepted that for a variety of legitimate reasons, not every home that gets planning permission will be built. As such it is not realistic or appropriate to expect that 100% of homes will be delivered from 100% of planning permission granted in any given location.’ Not only that, but it goes on to cite figures from Javid’s own department, DCLG, suggesting a 30-40 per cent ‘lapse rate’ – with 10-20 per cent of permissions never resulting in a start at all, and a further 15-20 per cent being reworked with a new permission sought later. What are the ‘legitimate reasons’ for so many planning permissions not resulting in a start? NLP provides a list: 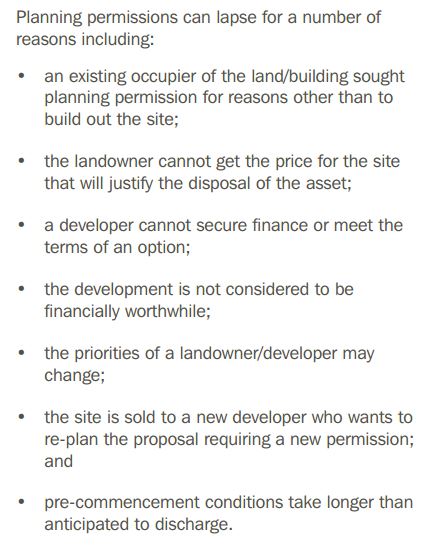 I would question ‘legitimate’ in some of these instances. Given the enormous pressure that planning departments are under, particularly given cuts to budgets in recent years, it might in fact be legitimate to question why planners are expected to spend time on applications that will not result in new homes. At the very least, it is worth considering whether planners should be given the tools to weed out such applications in order for them to prioritise those that are likely to deliver. And indeed imposing contractual obligations, backed up by the threat of a fine for transgression, may well be one way of doing this.

A further detail on which NLP’s analysis is very interesting is on who controls land with outline planning permission. They find that more than half of the sites of more than 100 units outside London were held by non-builders, or land promoters (only 21 per cent were held by volume builders). The NLP report is full of praise for land promoters, who are described at various points in the paper as ‘invaluable’ and ‘vital’ to the process. These are the people who seek to obtain planning permission for land and then take a cut from the often very large (often staggering) uplift in value that results. NLP argue that without land promoters ‘there is a real possibility that the flow of land for development would diminish’.

But I also recall a developer who was spitting tacks recently as he described to me the way in which promoters seek to maximise the windfall profits of landowners. In one recent example, the promoter had been so aggressive in his pricing for a site that, when none of the developers were prepared to cough up, he then took it back off the market to rethink his pricing strategy in order to achieve what he insisted it was worth. Bear in mind that landowners are already in line for life-changing amounts of money in many of these cases. The more profit they eke out like this, however, the more they are effectively driving down design standards, infrastructure investment, affordable housing components and driving up the developer’s target sale price, guaranteeing a slow build out.

There is an interesting illustration towards the end of the NLP report of how many planning permissions would be needed, taking lapse rates into consideration, in order for housebuilding to hit one million within this parliament, and then 300,000 a year by 2023 and thereafter. Using a more conservative lapse rate than is currently estimated (25 per cent as opposed to 30-40 per cent), the NLP authors calculate that planning permission would need to reach the high 300,000s, and even top 400,000 in one year. To build 300,000 homes a year for the next decade, we would need permissions in the high 400,000s.

This reflects a view that is regularly heard in the housebuilding industry (and beyond) – that to build 250,000 homes we need planning permissions of 350,000, etc. I think it takes those lapse rates too much for granted, however. As an aside it is worth noting a recent IPPR report that showed how Germany has a much tighter relationship between the number of planning permissions granted and the number of homes that are then built. It is legitimate to ask why planners, already under strain, are required to approve planning permissions that will not result in new homes. While getting each and every one of those planning permissions built out, as Javid wants, might well be a tall order, identifying the obstacles to a move in that direction must be a priority.

By the way, none of this is to say that we shouldn’t be seeking to get 400,000, or even 500,000, homes approved each year. We need lots more homes and lots more land to build them on. But if local planning authorities are approving that many homes, it is not unreasonable to expect that something like that figure does in fact get built – and in good time.

The full NLP report can be read here

Daniel Bentley is editorial director of Civitas and tweets @danielbentley