For all of the criticism regularly levelled at Help to Buy, the flagship equity loan scheme contains the kernel of a good idea. The equity loan concept – in which the value of the amount owed back is linked to movements in the property value – has been promoted by academics for years as a way of cushioning the impact on households and the economy of a fall in house prices.

But to little avail. Given the opportunity, lenders prefer to concentrate the risk on the borrower, which is what conventional mortgages do, and the financial services industry has not brought the products to market. Just as importantly, however, it seems that homebuyers too have little appetite to be sheltered from the risk of falling house prices.

This last is the underlying message of a fascinating new Bank of England working paper, which explores how homebuyers have approached Help to Buy equity loans since they were introduced in 2013. As it notes, the scheme is a rare real-world example of shared-responsibility lending – albeit one that has been provided by the government rather than a private lender and so the risks shared ultimately with the taxpayer.

By the end of 2018, more than 210,000 properties had been bought using more than £11.7bn of these loans. But, if that sounds a lot, consider that the majority of those who were eligible for HtB equity loans (61 per cent in the period up to April 2017) have not taken them. This despite not only the risk-sharing protection equity loans afford, but also the substantial financial benefit they provide by reducing mortgage repayments.

By bringing down their mortgage loan-to-value from, say, 95 per cent to 75 per cent, Help to Buy would have reduced not only the mortgage that these buyers needed to take out but also the interest rate on it. Given that there is no interest due on the equity loan for the first five years (except for a nominal £1 annually), nor does the government charge the homebuyer rent on the portion of the property they do not own, this support is pure subsidy. And yet it has been ‘left on the table’, in the words of the BoE authors, by hundreds of thousands of buyers.

It is possible that many of these buyers do not realise the advantages they are bypassing. More likely, given that many rely on the advice of brokers, is that they do not want to limit their potential capital gains, which is the flipside of the risk-sharing arrangement that equity loans offer.

This is supported by various other findings in the paper which suggest that equity loans are only used out of necessity and paid back as quickly as feasible. One in four of those taken out in 2013 had been repaid within four years, for instance; those who had done so tended to have enjoyed house price appreciation sufficient to allow them to exchange their loan for a larger mortgage.

Another striking finding is that when, in London, the maximum value that could be borrowed increased from 20 per cent to 40 per cent, large numbers of borrowers did not use this to reduce their mortgage and exposure to house prices – they used it to buy a bigger, better property. This, in fact, went for Help- to-Buy borrowers in general: equity loans have been used to buy properties at values higher than average relative to the purchaser’s income, properties that they would not otherwise have been able to afford.

That Help to Buy is being used as a form of bridging finance, rather than a hedging tool, is far from surprising, of course. A product marketed as ‘Help to Buy’, after all, will more likely be seen as the former than the latter. But the evident desire of so many buyers to not only own their own home but to expose themselves to the full risk of house price movements – even when then they do not need to – must also raise concerns.

Especially when a good chunk of those who shunned equity loans needed annual house price growth of 7.7 per cent to offset the loss of subsidy that was available. As the authors note, the early years of Help to Buy were a period of rapid house price growth and many of those buyers did in fact do better for avoiding the scheme (that is, they earned more in capital growth than they would have saved in lower interest payments). But many did not and have ended up worse off than they might have been. 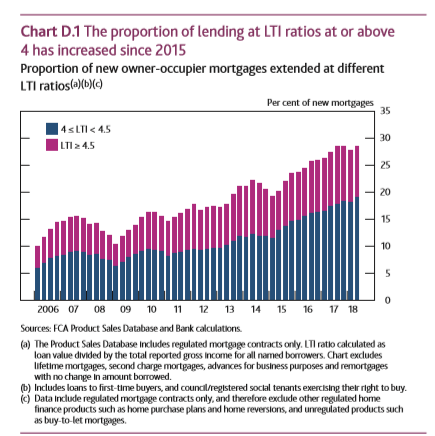 Moreover, today the prospect of such levels of house price appreciation being repeated – given that interest rates have hardly any room for further downward movement – seems highly unlikely. Prices in London and the South East have been falling for a while and the growth of those in the rest of the country is slowing markedly. House prices are not a one-way bet and the risk to first-time buyers of capital losses is real.

This is not just a risk to them but to the rest of the economy. A few years ago another BoE study showed how debt-to-income ratios above four were associated with especially sharp withdrawals of consumption after 2007 which amplified the effects of the recession (note that this risk has little to do with rising interest rates and defaults: interest rates fell in fact after 2007). And yet the proportion of new mortgages at loan-to-income ratios of more than four has almost doubled from about 15 per cent in 2007 to about 29 per cent last year (chart, right), according to the latest Financial Stability Report. This should attract more commentary than it does.

In some respects, then, it would be more reassuring if those who are borrowing large multiples of their income, and are eligible for Help to Buy equity loans, were more inclined to take advantage of them. As it is, it seems many first-time buyers are more determined to ride the house price rollercoaster at full throttle.

:: Daniel Bentley is editorial director of the think tank Civitas