No benefit for UK trade from EU ‘collective clout’

It is assumed that the size of the EU provides ‘greater bargaining strength’ than the UK alone, or that the EU has more ‘influence and weight’, ‘collective clout’, and ‘negotiating capital’. Moreover, it is said that non-member countries will inevitably favour negotiating to obtain freer trade access to 28 countries rather than to one, and this will lead to quicker and more favourable agreements for its members including the UK. Hence the UK has surrendered its right to negotiate FTAs to the EU.

In a new study to be published later this month, Michael Burrage tested these confident assumptions by looking at all the trade agreements around the world since 1960. The list includes a number of small, independent countries that have no ‘collective clout’. Four are worthy of particular attention: Chile, Korea, Singapore and Switzerland. Have they been unable to negotiate as many FTAs as the EU?

The absence of ‘collective clout’ does not appear to have prevented them concluding agreements, in rapid succession, with much larger economic powers, covering both goods and services long before the EU. 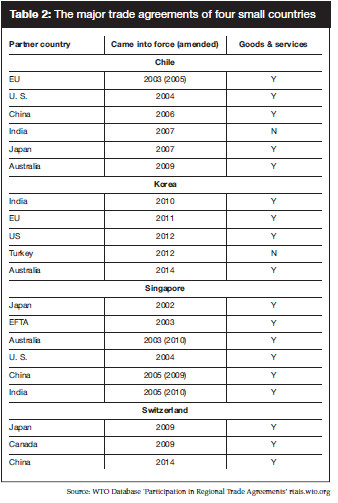 Unlike some of these countries, the EU does not currently have agreements in force with the US, Canada, Australia, China, Japan or India. To put the scale of the EU’s negotiating efforts in perspective, the 2012 GDP of Japan and Australia, with which two of these small countries have concluded agreements, comfortably exceeds the combined 2012 GDP of every single foreign country with which the EU has concluded an FTA over the 45 years between 1970 and 2014.

SMALL COUNTRIES HAVE GREATER CLOUT THAN THE EU

‘This data gives no support to the view that small independent countries are less able to negotiate with large economic powers, or that the latter are less willing to negotiate with them, and no support either to the view that they will be slower in concluding such agreements. Those particular disadvantages for smaller, independent countries are clearly imaginary, and along with it surely the notion that the UK would be unable to negotiate agreements on its own.’

Since 1970, the EU has concluded 37 agreements, most of them with small economies, some multi-country. The aggregate GDP in 2015 of the 55 countries with an EU agreement in force in January 2015 is $7.7 trillion.

By contrast the aggregate GDP of all the countries with which Chile had agreements in force is $58.3 trillion, Korea’s totalled $40.8 trillion, Singapore’s $38.7 trillion and Switzerland’s $39.8 trillion. However, the agreements of these four countries include their agreements with the EU, which has a GDP of $16.7 trillion.

THE UK HAS SACRIFICED MANY YEARS OF FREER TRADE

Both OECD and UN Comtrade data show that, by surrendering the right to conduct its own trade negotiations, the UK has sacrificed many years of freer trade for its exporters of both goods and services. Michael Burrage makes an attempt to rough count the still-mounting value of these lost years of freer trade by supposing that an independent UK negotiating its own agreements had kept pace with Switzerland or Singapore. Any attempt to calculate the benefits of the Single Market should also include these substantial and continuing losses. 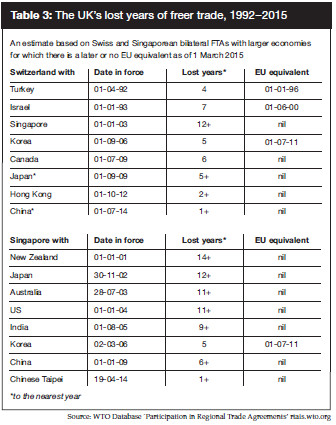 Moreover, the post-agreement increases in Swiss exports appear to be larger than those of the UK. Swiss exports have doubled their average annual rate of growth in 5 of the 14 countries after their agreements came into force. The UK achieved this only once, with Jordan.

The argument that the EU has greater bargaining strength and is more capable of securing beneficial Free Trade Agreements for the UK is founded on the assumption that the EU has more ‘influence and weight’, ‘collective clout’, and ‘negotiating capital’. This, when examined, appears to be a myth.

Michael Burrage is a sociologist by training, was a Fulbright scholar at the University of Pennsylvania, and lectured at the London School of Economics for many years, specialising in cross-national analysis of industrial enterprise and professional institutions. He has spent spells as a research fellow at Harvard, at the Swedish Collegium of Advanced Study, Uppsala, at the Free University of Berlin and at the Center for Higher Education Studies and the Institute of Government of the University of California Berkeley. He has been British Council lecturer at the University of Pernambuco, Recife, Brazil, and also a visiting professor at Kyoto, Hokkaido, Kansai and Hosei universities in Japan.

His previous Civitas publications include Where’s the Insider Advantage? A review of the evidence that withdrawal from the EU would not harm the UK’s exports or foreign investment in the UK (2014).

Civitas: Institute for the Study of Civil Society is an independent, cross-party think tank that facilitates informed public debate on important issues of the day. It is not affiliated to any political party and receives no state funding
Visit our homepage, read our blog, follow us on Twitter

Myth and Paradox of the Single Market : How the trade benefits of EU membership have been mis-sold

A selection of recent media coverage