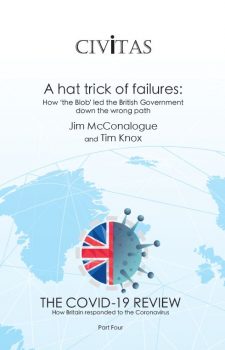 A hat trick of failures: How ‘the Blob’ led the British Government down the wrong path

Britain has achieved an undesirable hat trick of failures in its Covid-19 pandemic response.

Jim McConalogue and Tim Knox argue in this report that:

McConalogue and Knox put the blame for this poor response on what they call ‘The Blob’ – the scientific clique entrenched within a managerialist Whitehall culture which the politicians chose not to confront or question. They show how the advisory groups to the government appear to have been granted ‘a representational monopoly’ with the advice coming from scientific committees being rarely challenged either by government or by those outside the inner circle of advisers.

They argue that ministerial deference to ‘the science’ was frequently not justified. ‘The science’ made many mistakes. Other considerations – including the impact of sending of elderly infected patients from NHS hospitals to care homes and the wider economic costs – were never given the attention they deserved.

The authors recommend that parliament and future inquiries should question whether the government might have drawn upon a far wider pool of expertise than that offered by existing advisory bodies. Should there now be a re-evaluation of the purposes, composition and objectives of the government’s scientific advisory groups? Should the circular and self-reinforcing way in which the Cabinet Office Briefing Rooms (COBR) authorises the Scientific Advisory Group for Emergencies (SAGE) but then almost solely and unquestionably relies upon its advice in return be dismantled? And why did other European countries – including Germany, Sweden and the Netherlands – fare so much better in terms of their rates of excess deaths, the economic impact of the measures taken in response to the pandemic and their readiness to ease lockdown?