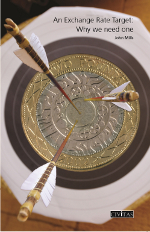 An Exchange Rate Target: Why we need one

It is increasingly being recognised that the over-valued pound is holding back the competitiveness of British exporters.

While sterling has fallen since 2008, the advantages have not been felt because of continued uncertainty. In this urgent and insightful publication, the economist and entrepreneur, John Mills, argues that the government should set a competitive exchange rate target and take active measures to achieve it.

As well as giving businesses more confidence about the long-term economic situation, it would allow the UK to reap the benefits of a weaker pound. Mills sets out how this would help the country tackle unemployment and welfare dependency and support manufacturing.

Maintaining a strong pound over many years has sucked demand out of the economy. We buy more goods from abroad than vice versa. This causes high long-term unemployment and welfare dependency, while driving up public and private debt – as we have to borrow to finance our over-consumption.

Mills’ radical proposal is that the pound should be devalued by about a third to unleash British manufacturing and allow the UK to once again pay its way in the world.

This would be a wrenching change for policymakers. But Mills is able to correct some common misconceptions about the idea of currency devaluation, and he very ably sets out why devaluation would not create more inflation than would occur anyway, would not reduce living standards, and would be very unlikely to cause other countries to retaliate.

Allowing the economy to operate at full capacity would help get the UK back into growth, tackle unemployment by creating jobs, reduce the welfare bill and help reduce inequalities in wealth.

John Mills is an entrepreneur and economist. He is also the author of A Competitive Pound For A Stronger Economy for Civitas, as well as Growth and Welfare: A New Policy for Britain; Monetarism or Prosperity?; Tackling Britain’s False Economy; Europe’s Economic Dilemma; America’s Soluble Problems; Managing the World Economy; A Critical History of Economics; and Exchange Rate Alignments.