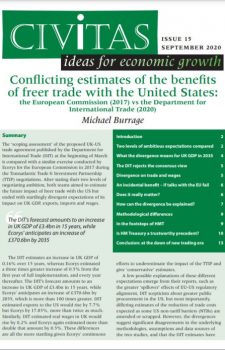 The Trade Secretary is reported to be prepared to rip up the Trade Department’s rulebooks on assessing deals in an attempt to improve how it measures the economic benefits of its post-Brexit ‘Global Britain’ project. Notably, when the UK struck its first major post-Brexit trade pact with Japan, critics were quick to point out it would seemingly boost UK GDP by only 0.07%. A broader debate has already begun to question why there have been such conflicting (under)estimates of the benefits of post-Brexit freer trade with other countries across the globe.

Focusing on UK-US trade, a new report published by Civitas compares the ‘scoping assessment’ of the proposed UK-US trade agreement developed by the Department for International Trade (DIT) in March with a similar 2017 exercise conducted by a research consultancy for the European Commission during the Transatlantic Trade & Investment Partnership (TTIP) negotiations.

The author, Michael Burrage, highlights that – in contrasting their two levels of negotiating ambition – both negotiating teams aimed to estimate the future impact of freer trade with the US. Each assessment ended with startlingly divergent expectations of its impact on UK GDP, exports, imports and wages:

Projected GDP increases: The DIT estimates an increase in UK GDP of 0.16% over 15 years, whereas Ecorys estimated a three times greater increase of 0.5% from the first year of full implementation, and every year thereafter.

“If that is indeed the only impact on UK GDP the DIT modellers expect, then the divergence from the Ecorys and European Commission expectation would indeed be vast, and the impact on UK GDP truly minuscule, indeed scarcely noticeable.”

“A disagreement of this magnitude demands an explanation, first of all, for the UK negotiators. It does not seem like a wise or winning strategy to let them enter negotiations with extremely low expectations…”

The author finds that the DIT was not alone when breaking with the consensus about the UK GDP growth that might be expected from a UK-US free trade agreement. Michael Burrage finds that HM Treasury had arrived at almost exactly the same figure two years earlier.

The Free Trade Agreement (FTA): “This UK-US FTA is, so to speak, the flagship for free trade, and other agreements. A rather diminutive flagship. Over the next 15 years, if the DIT is right, UK GDP might expect, at best, to gain of about one third of its present annual contribution to the EU, or less than one tenth, over fifteen years, of the £39bn it might pay the EU in the withdrawal agreement.”

The author concludes that “…since negotiations with the US have resumed, it is now a matter of some urgency to understand why these two expectations of the impact of a FTA with the US differ so drastically, and which is the more plausible.”

Explanations of difference: “The main reason for the difference between the two sets of expectations is, we may conclude, a massive difference in expectations about the relaxation or elimination of NTBs [non-tariff barriers]. Ecorys expected they would contribute 0.33% of the increase in EU and UK GDP, while DIT expects them to contribute, at most, 0.04%, one eighth as much.”

Michael Burrage urges “a rigorous re-evaluation of the DIT scoping assessment”, suggesting the Department publish an update to explain why their expectations of the likely benefits for the UK of a free trade agreement with the US differed from those expected by European Commission estimates over three years ago.
The report finds that UK-US FTA is of such importance for the future of UK trade policy that it deserves a second scoping assessment.