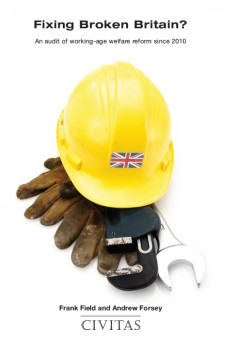 Fixing Broken Britain? An audit of working-age welfare reform since 2010

The thorny issue of benefit dependency has bedevilled the welfare state since the 1970s, and has increased in importance with each successive decade. Welfare-to-work strategies since 1997 have begun to make inroads into the problem of long-term out-of-work claimants, which once seemed intractable. But, as Frank Field and Andrew Forsey highlight in this forensic examination of the welfare landscape, challenges remain.

First, the success story needs to be extended to certain groups – such as the disabled and the over-50s – who too often continue to be excluded from the jobs market. Second, much more needs to be done to ensure that those who are in work are able to progress up the pay ladder and out of poverty: too many people are in jobs which are so low paid that their incomes are only brought up to acceptable levels by the wage subsidy better known as tax credits. Effectively, the bill to taxpayers has been switched from out-of-work benefits to in-work benefits.

Tackling this will require an increase in productivity without an increase in unemployment. Only by raising output per worker – and ensuring that the rewards are fairly shared – can real living standards rise over time. This productivity challenge moves the welfare reform agenda into new territory, requiring engagement from beyond the Department for Work and Pensions as it links up with wider economic and political considerations.

Field and Forsey argue that by building on the foundations of the new National Living Wage, raising productivity and boosting the wages of the lower paid, the government can reduce benefits dependency still further and make significant additional savings from the tax credit bill.

Frank Field has served as Member of Parliament for Birkenhead since 1979. In 1990 he took up the chairmanship of the Social Security Select Committee and continued in this role up to 1997. In that year he accepted the position of Minister for Welfare Reform in Tony Blair’s first government. He then served as a
member of the Public Accounts Committee between 2002 and 2005. In 2010 he was appointed by David Cameron to lead the Independent Review on Poverty and Life Chances. Frank co-chaired last year’s All-Party Parliamentary Inquiry into Hunger in the United Kingdom and he currently chairs the Work and
Pensions Select Committee.

Andrew Forsey is head of Frank Field’s parliamentary office, having joined in 2013. In 2014 he served as Secretary to the All-Party Parliamentary Inquiry into Hunger in the United Kingdom. Andrew then wrote the inquiry’s two follow-up reports in 2015, focusing on the extent and causes of hunger in this country.