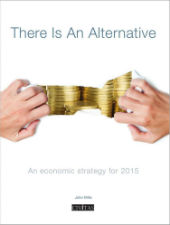 There is An Alternative: An economic strategy for 2015

The economic recovery has finally taken hold, but serious doubts remain about its strength, its sustainability and its ability to deliver improved living standards for all.
In this hard-hitting critique of the UK’s growth prospects, entrepreneur and economist John Mills warns that the current economic model is unsustainable and risks years of stagnation.

By the time of the 2015 general election, living standards will still be lower than they were before the recession and total government debt will be approaching 100% of GDP. The optimism generated by rising house prices could soon give way to anxiety about the widening balance of payments deficit and the need to raise interest rates.

Whatever the immediate outlook, the UK is saddled with an economy which consumes too much, invests too little and which cannot pay its way in the world.

But there is an alternative to this unpromising future. Here, Mills sets out an economic roadmap that could transform the UK’s long-term prospects within five years, by rebalancing our economy in favour of exports, rebuilding our manufacturing base and weaning the nation off its dependency on borrowing.

It is a radical manifesto which demands an end to the short-termist consensus that has dominated Treasury thinking for far too long. Mills charts a path to an economy growing at 4% to 5% a year, bringing down unemployment, increasing investment, boosting living standards and reducing inequality.

The only question that remains is whether the government elected in 2015 is prepared to seize on the challenge with the clarity of purpose to see it through.

Among the various obstacles to Britain’s long-term economic success, Mills singles out for criticism policymakers’ focus on monetary and fiscal policy to the neglect of exchange rate policy.

“With all three policies for controlling the economy working together, however, and without taking undue risks with inflation, it is comparatively easy to see how our economic prospects could be transformed. This is what we need to do,” he writes.

“A major change in the perception of economic policies and strategy is going to be needed but it is all possible, achievable and viable. There is an alternative and we need to start implementing it as soon as we can.”

“…it is time to take Mills’ arguments seriously. Otherwise, we could soon be back to the traditional British pattern of a recovery which is already doomed from the start…”
Roger Bootle, Daily Telegraph

John Mills is an entrepreneur and economist. He graduated in Philosophy, Politics and Economics from Merton College, Oxford, in 1961. He is currently chairman of John Mills Limited, a highly successful import-export and distribution company. He has been Secretary of the Labour Euro-Safeguards Campaign since 1975 and the Labour Economic Policy Group since 1985. He has also been a committee member of the Economic Research Council since 1997 and is now Vice-Chairman. He is also Chairman of The People’s Pledge campaign for a referendum on Britain’s EU membership, and Co-Chairman of Business for Britain. His previous Civitas publications include A Price That Matters (April 2012), An Exchange Rate Target: Why we need one (April 2013) and A Competitive Pound for a Stronger Economy (October 2013).