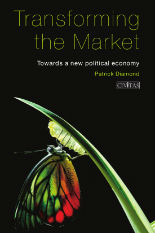 Transforming the Market: Towards a new political economy

Britain is at risk of a return to the unsustainable debt-fuelled growth that left the economy so badly exposed during the 2008 financial crisis.

While recent growth figures have been encouraging, little has been done on the more fundamental task of rebalancing the economy and tackling the chronic short-termism which has held the UK back.

Patrick Diamond, a former Downing Street adviser under the last Labour government, warns in this latest volume that the current economic debate is not addressing the underlying problems. Rather than simply focusing on a rapid return to growth to the exclusion of wider considerations, policymakers need to end the over-reliance on financial services and the enormous regional imbalances between the South East and the rest of the UK.

Diamond, who worked with Tony Blair and later helped write Labour’s 2010 manifesto, calls for a new economic model which is less susceptible to global shocks and in which the rewards of growth are more fairly distributed. Pulling together a wide range of strands in current centre-left thought about the future of the economy, he sets out a “market-transforming” strategy to encourage new institutions that would inculcate long-term commitment and trust.

His central recommendations include, among other things, greater diversity in the economy, using public procurement to promote SMEs, and giving councils more powers to build local economies from the bottom-up.

Diamond also advocates more regional economic autonomy, including regional banking, and the development of infrastructure such as the expansion of regional airports; better quality of apprenticeships and a renewed emphasis on traditional craft skills; adoption of the living wage and a more equitable distribution of wealth through pay packets.

He would also reform of corporate governance, including making predatory takeovers more difficult, and extending employee ownership with partial remuneration through shares.

The approach that he describes requires a shift in emphasis from the short-termist pursuit of growth that is the hallmark of contemporary Westminster politics.

Politicians must look beyond simply winning the next general election and think strategically about the long-term prospects for the economy.

“…should serve as the foundations for Labour’s next government…”
Stephen Bush, Progress

“…a programme focussed on creating the institutions necessary to get better economic outcomes… this is the key agenda facing those who want a better economy…”
Duncan Weldon, TUC

“If there were to be a ‘department for Milibandism’… then Diamond’s book would be a strategy for it.”
Jonathan Todd, Progress

Patrick Diamond is Lecturer in Public Policy at Queen Mary, University of London and Vice-Chair of Policy Network. He is Gwilym Gibbon Fellow at Nuffield College, Oxford, and a Visiting Fellow in the Department of Politics at the University of Oxford. Patrick is also an elected member of Southwark Council. He is the former Head of Policy Planning in 10 Downing Street and Senior Policy Adviser to the Prime Minister. Patrick has spent ten years as a Special Adviser in various roles at the heart of British Government, including No.10 Downing Street, the Cabinet Office, the Northern Ireland Office and the Equality and Human Rights Commission (EHRC) where he served as Group Director of Strategy.