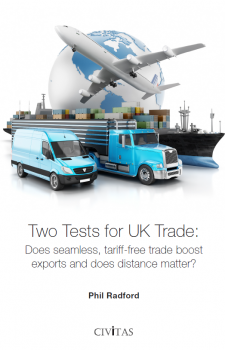 During the UK’s departure from the European Union, debate about UK trade policy was dominated by two assertions:

In this report, trade analyst Phil Radford performs two correlations on UK trade data to scrutinise the evidence for these two assertions.

By comparing the performance of the UK’s 14 largest manufacturing export sectors in EU and non-EU markets from 2000-2019, the author finds there is a mild-to-medium inverse relationship between the comparative benefit enjoyed by a sector in the EU – in terms of tariffs and seamless access – and its comparative performance in EU markets over the past 20 years. In other words, there is no positive connection between the supposed benefits of seamless, tariff-free trade with the EU, and the export performance of UK manufacturing sectors.

This research shows that over the past two decades, UK manufacturing exports to the EU performed best where the effect of the Customs Union and Single Market were weakest or absent. In so far as the EU-UK Trade and Cooperation Agreement replicates the terms of the UK’s previous trading relationship, Radford concludes, ‘it may turn out to be a very bad deal for the UK’.

The author also finds that for 94.1 per cent of UK goods exports, there is a mild inverse relationship between geographical proximity and export growth for the period 2000-2019. In short, the further a trade partner is from the UK, the faster exports grow – after the GDP growth rates of partner countries are taken into account.

The conclusions in this report support the repeated assertions of liberal, free trade economists: that the benefits of seamless, tariff free trade with neighbouring economies in the EU are overstated in the economic models used in official trade forecasts.