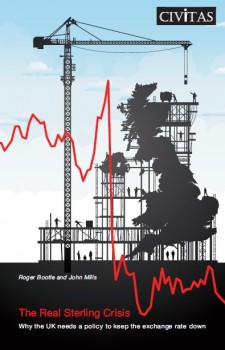 The Real Sterling Crisis: Why the UK needs a policy to keep the exchange rate down

The fall in the value of sterling since the vote for Brexit has had commentators wringing their hands with concern. But why are so many so quick to assume that a cheaper pound is a bad thing?

The truth, as leading economists Roger Bootle and John Mills explain here, is that the British economy has suffered from an overvalued pound for many years. It has restricted exports by making them more expensive and stimulated imports by making them cheaper; it has therefore been a leading cause of the UK’s large current account deficit.

But it has also reduced profits in relation to real wages, which has led to lower investment, lower productivity growth and lower living standards. And because the effects of a high exchange rate fall disproportionately on manufacturing this has helped create an unbalanced economy in which the winners are mostly located in financial services and the South-East.

The real sterling crisis, then, is not that the pound has fallen in recent months – but that it had previously been priced too high for many years.

This was allowed to happen by policymakers overly fixated with keeping down inflation and overly confident that ‘the markets know best’. In fact, markets may systematically misprice financial variables, as is widely acknowledged now in relation to equity and property.

In this pamphlet, Bootle and Mills – whose political sympathies, with the Right and the Left respectively, cross the political divide –  argue that the government should now devise a new economic framework that has at its centre an exchange rate policy designed to ensure the pound continues to trade at a competitive level in the years ahead.

They outline the steps that might be undertaken towards such an approach and address head on the anxieties many have about a cheaper pound.

‘With the British people having voted to leave the EU, this is an ideal time for the government to pursue an alternative policy framework. Indeed, setting a policy that would establish and maintain a competitive exchange rate for sterling is the single most important thing that a government can do for the promotion of a prosperous Britain.’

Read: The impending economic disaster and the pound’s role in causing it

Read: The current position of overseas trade and net wealth and where we are heading

Read: The historical background to the gap in the UK’s current account and how it could be closed

Read: How to get the exchange rate lower

Read: Objections to a lower exchange rate – and the answers

One of the City of London’s best-known economists, Roger Bootle is Chairman of Capital Economics, one of the world’s largest independent economics consultancies, which he founded in 1999. Roger is also a Specialist Adviser to the House of Commons Treasury Committee, an Honorary Fellow of the Institute of Actuaries and a Fellow of the Society of Business Economists. He was formerly Group Chief Economist of HSBC and, under the previous Conservative government, he was appointed one of the Chancellor’s panel of Independent Economic Advisers, the so-called ‘Wise Men’. He was a visiting Professor at Manchester Business School from 1995 to 2003, and between 1999 and 2011 served as Economic Adviser to Deloitte.

John Mills is an entrepreneur and economist with a lifelong political background in the Labour Party, leading him to being its largest individual donor. He is currently Chairman of John Mills Limited (JML), a consumer goods company specialising in selling products requiring audio-visual promotion at the point of sale, based in the UK but with sales throughout the world. John has been Secretary of the Labour Euro-Safeguards Campaign since 1975 and the Labour Economic Policy Group since 1985. He has also been a committee member of the Economic Research Council since 1997 and is now its Vice-Chairman. During the period running up to the June 2016 referendum he was Chair of The People’s Pledge, Co-Chairman of Business for Britain, Chair of Labour for a Referendum, Chair and then Vice-Chair of Vote Leave and Chair of Labour Leave, which became independent of Vote Leave two months before the referendum.