Last Thursday, after almost a week of collapsing share prices in the housebuilding sector and lots of anecdotal stories of housebuyers pulling out of transactions or suddenly dropping their bids by 10 per cent, ministers held a meeting with members of the Home Builders Federation (HBF).

The subtext beneath this gathering was, or should have been, clear: house prices are likely to tumble in the aftermath of the Brexit vote and whenever house prices tumble builders cut their output. It was ever thus; you can trace such peaks and troughs in construction, responding to the ups and downs of prices, at least as far back as the early 18th century.

Housebuilding output has been slowly picking up in recent years, but it is still a long way off what is needed, by roughly 80-100,000 homes a year. It would be disastrous if progress towards that figure were knocked off course now. But there is little sign of urgency about this situation from the government.

Little wonder perhaps, given that the HBF’s press release from last week’s meeting has builders telling the Communities Secretary Greg Clark that the referendum result had made no difference to ‘reservations and sales rates’ and that they remained committed to ‘driving up supply’.

‘House builders remain confident in the underlying level of demand for housing and will continue to deliver the homes the country needs,’ HBF deputy chairman Peter Andrew is quoted as saying.

Move along please, nothing to see here. One has to wonder: is this just for show, or is the Secretary of State being had?

It is plain to see that trouble lies ahead. The boss of Taylor Wimpey, Pete Redfern, was quoted at the weekend saying that, despite apparently little change in behaviour from customers so far, stimulus measures would be needed and ‘shouldn’t wait until September’. 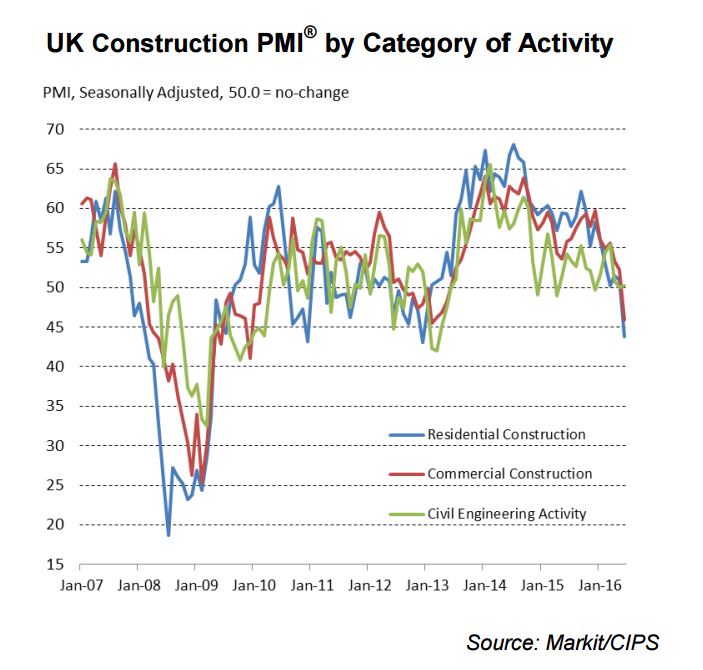 But if the alarm bells were slow to ring in Whitehall, they should be sounding loudly enough after yesterday’s purchasing managers’ survey by Markit/CIPS. This showed construction activity falling across the board in June, but worst of all in residential construction, which fell at its fastest pace since December 2012. More troubling still, 80 per cent of the responses to this survey came in before the surprise Leave result on June 24th, suggesting this is only the start of it.

Assuming the government does see the need to intervene, the question is ‘how?’ Housebuilders will doubtless echo Taylor Wimpey’s call for a demand-side stimulus to keep prices up. This, however, would be just another short-term sticking plaster that might – just – maintain construction levels but would do nothing for affordability. I have written elsewhere that the government should use this moment to change tack and invest once more in supply. This would essentially mean the direct commissioning of construction projects, funded by the government.

Right on cue, the Communities and Local Government Select Committee today announced a new inquiry into the capacity of the housebuilding industry to deliver the homes the country needs. Its chair, Labour MP, Clive Betts, promised to ‘cast a critical eye’ over the major homebuilders in examining why they have failed, year after year, to keep up with demand.

A warts-and-all analysis of what is, and has been, going wrong is vital. So is finding an alternative that works.

Daniel Bentley is editorial director of Civitas and author of ‘The Housing Question: Overcoming the shortage of homes’. He tweets @danielbentley