Two months after the Brexit vote, what’s the outlook for housebuilding?

In housing, all eyes are on the major builders for signs of their reaction to the Brexit vote. Will they reduce output in response to the uncertainty, or will they plough ahead as if nothing’s happened? Equally important, however, is where we were in the months leading up to the referendum. The latest quarterly figures, published today, are not terribly encouraging.

In the year to June, starts were up year-on-year to 144,280, but by a meagre two per cent. Completions were up by a healthier six per cent to 139,030* – but there the annual figure disguises the fact that completions have been falling for the past two quarters (by three per cent, year on year, between January and March, and by two per cent between April and June).

So housebuilding activity, which has been picking up a bit over recent years, already looked to be stagnating a little coming into June 23. This is particularly worrying given that the levels it had reached were of course still nowhere near what is needed or even back to pre-recession levels. Starts are still 26 per cent below, and completions 28 per cent below, their 2007 peak.

This, from DCLG’s June 2016 house building update, is how the picture looked going into the referendum: 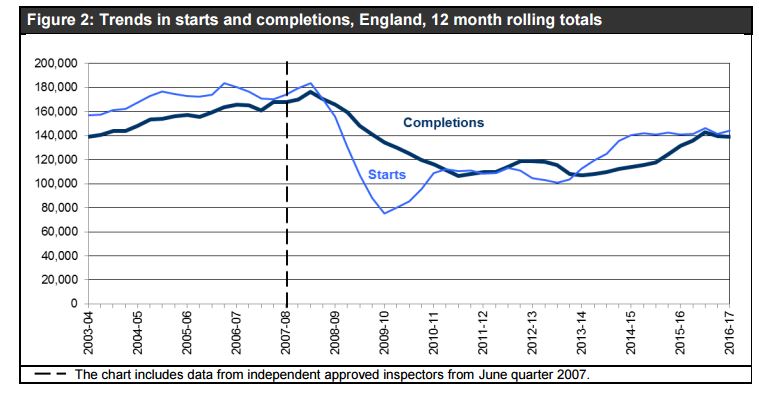 All of this against the backdrop of a need for something like 250,000 new homes a year, if not more. Even the government’s 200,000 a year target looks highly ambitious and unlikely – on recent evidence – to be achieved. But what of the outlook since June 23?

Shares in the major listed housebuilders have taken quite a hit since the Brexit vote and have failed to recover as quickly as many other FTSE companies. Yet the companies themselves have by and large struck an upbeat note throughout, pointing out that the fundamentals of the market – too much money chasing too few homes – has not changed.

Soon after the referendum, the Home Builders Federation struck a bullish note with its deputy chairman, Peter Andrew, saying housebuilders remained “confident in the underlying level of demand for housing” and would “continue to deliver the homes the country needs”. The new Housing Minister, Gavin Barwell, appeared to take this reassurance at face value when he repeated it to the House of Commons in late July.

This week Persimmon provided even more cheer to the industry, reporting that customer interest since the referendum had been “robust”, visitor numbers were up 20 per cent year on year, and private sale reservations up 17 per cent year on year. In its half-yearly update it said it planned to increase its “build activity and productivity”.

So all is going swimmingly then? Possibly – for Persimmon’s shareholders at least. But delivering strong returns for shareholders is not the same as building the homes the country needs. One notable aspect of the firm’s update was its acknowledgement that it had been, in the first six months of 2016, “increasingly selective in acquiring new land”. Given the uncertainty around the impact of Brexit, it added, the company would “remain cautious with respect to new land investment”. This might be what its shareholders want to hear, but it does not sound like a developer desperate to ramp up its output over the next few years.

A rather more robust and objective take on all of this is provided by the consultancy Capital Economics in a report for the housing charity Shelter, published yesterday. It forecasts that while prices are unlikely to fall in the next year or so (for the simple reason that sellers hold off selling if a modest, short-term slowdown is anticipated), housing starts are likely to fall by eight per cent in the 12 months after the Brexit vote; after that they will grow again, but only slowly all the way to 2020. The government’s housebuilding target of a million homes by 2020 is likely to be missed by 266,000 on the current trajectory.

The new regime in Downing Street under Theresa May appears to be determined to boost housing supply. The question is whether they are prepared to embark on a radically different approach. All the signs are that they must – and that they would have had to anyway, with or without Brexit.

* These quarterly figures usually under-estimate the reality somewhat. The annual figures published in November provide a more comprehensive picture. However, the quarterly figures are still valuable for indicating the trends in activity and, even if they under-count by 30,000 units a year, supply would still be well below the required levels.

Daniel Bentley is editorial director of Civitas and the author of ‘The Housing Question: Overcoming the shortage of homes‘

1 comment on “Two months after the Brexit vote, what’s the outlook for housebuilding?”