What role for council building? A market-focused solution is unlikely to deliver the homes we need

There have been lots of encouraging noises ahead of tomorrow’s housing white paper. Less focus on home ownership and greater support for renters, including a push for three-year tenancies; help for older people in large family homes who want to ‘right-size’ in later life; measures to tackle slow build-out rates and increase densification. All steps in the right direction, although we await the finer details in these areas. It is disappointing to see that there will be no change to green belt policy, although there are indications that this government might be more inclined to support green belt release, within the current rules, in certain circumstances. This is what has been animating Andrew Mitchell so much.

It would be a surprise if a further initiative or two were not being held back for the day, although the FT reports this morning that there is no ‘blockbuster’ announcement to come. We will see. But, as things stand, there seem to be a couple of outstanding issues.

First, housing minister Gavin Barwell indicated yesterday that there would be no change to the government’s target of supplying a million new homes by 2020. This – 200,000 homes a year, maybe less if the target extends to the end of 2020 as the National Audit Office recently discovered – simply isn’t enough. Projected household formation for most of this parliament is 236,000 a year. To get on top of the backlog and address rising prices we probably need about 300,000 homes  year. Maybe ministers are setting the bar low to be sure they can clear it; understandable politically, but still it does not smack of a step-change in ambition.

Second, there is so far little indication of a significant extension of public-sector housebuilding. Barwell did say yesterday – when asked – that he wanted to see councils get back into the ‘housebuilding game’. It did not sound like a major initiative, however. Such a move would need to be facilitated by lifting the cap on local authority borrowing for housing, or funded from the centre, coupled probably with tougher compulsory purchase powers for local authorities. Something like this would be a major shift, and there has been no talk of it so far.

If the government is to persist with predominantly market-led housebuilding provision, it is worth reminding ourselves of the trend they will be trying to reverse with their latest reforms. Figure 1 is familiar now to anybody with a passing interest in housing policy, demonstrating how the decline in housing supply coincided entirely with the withdrawal of publicly-funded council building. 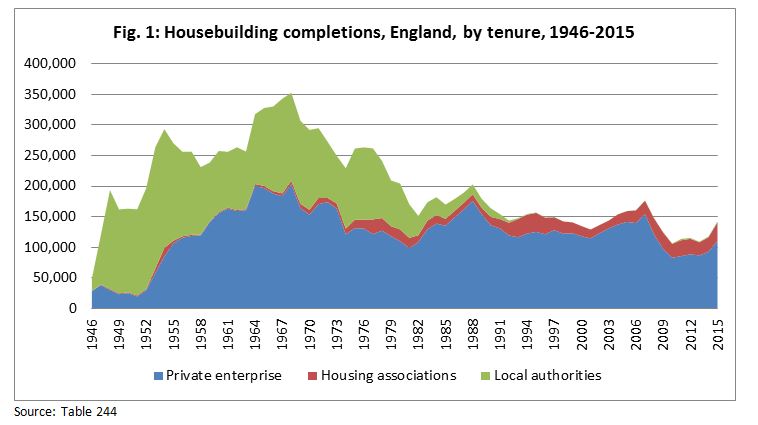 What tends to get rather less attention, however, is that not only has local authority building been in decline since the 1960s, but so has private-sector output, as Figure 2 shows. In fact, completions by private builders have been gradually diminishing since the peak building years of the 1930s, with several ups and downs along the way and each subsequent peak getting smaller and smaller. (I have used data for Britain in this one as I could not find precise 1930s data for England – but the trend is the same). 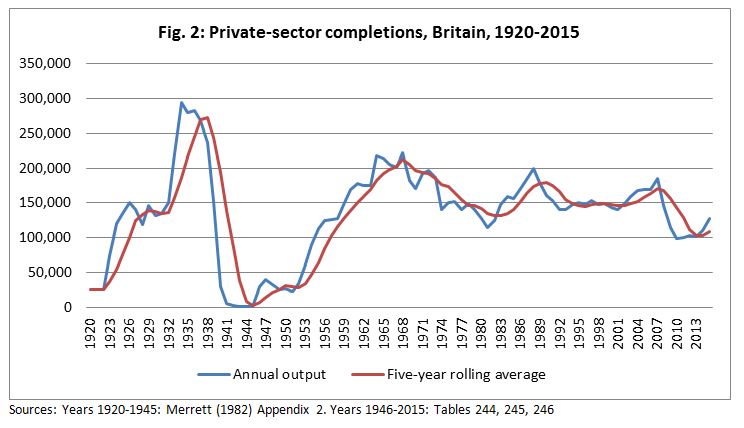 There is of course a longstanding debate about the role of the planning system in this trend, which I won’t rehearse here. What commentators can agree on though is that residential land prices, and so house prices, have risen rapidly across these decades and have, since the 1990s, become detached from average earnings. This presents a challenge for private developers, because they can only build as many homes as they can sell. Hence they are very keen on keeping interest rates down and on measures such as Help to Buy, which effectively give their potential customers greater purchasing power in a market that would otherwise be out of their reach (I discussed this process and its impact on house prices at greater length in an LSE blog recently here).

Housebuilders argue, fairly, that they have upped their output significantly since the crash. But just look, in Figure 3, at how many of those additional new-builds have been facilitated by Help-to-Buy equity loans since they were introduced in 2013. 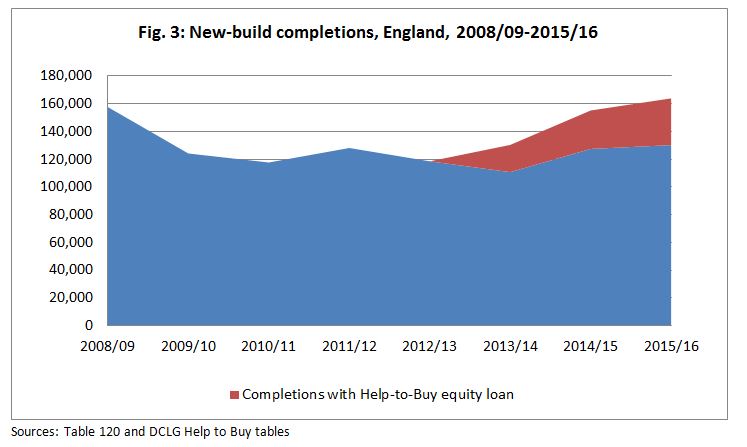 With continued low interest rates, Help-to-Buy loans, the introduction of Starter Homes (which amount to a similar arrangement in which the state will effectively subsidise house purchases), and any measures in the white paper, this latest upturn in market-led output may well have further to go. But it only works by giving people more money to buy houses with and eventually, without a correction in house prices, building more homes for sale will be like pushing on a piece of string. The introduction of smaller builders on smaller sites may help a bit, but they too will face the same challenge of market absorption.

In this context, the attraction of build-to-rent – tapping into the potential for institutional investment in housing supply – is obvious. But there is little sign that the appetite for build-to-rent investment, while welcome, is yet on a scale necessary to get housebuilding up to the levels needed. As Lindsay Judge of the Resolution Foundation points out today, it is also focused on a certain section of the market: mostly higher-end living in two and three-bed apartments.

For all that the measures in the white paper might help improve supply, without a fall in house prices, or a commitment to a programme of non-market, publicly-backed construction, it is difficult to imagine it making the long-term, sustainable difference that is needed. But, of course, we await the details.

1 comment on “What role for council building? A market-focused solution is unlikely to deliver the homes we need”